On this past April summer-like Sunday I went to the annual Shad Festival at Lambertville, NJ where there were plenty of spring blossoms such as these Mock Orange.

The festival celebrates the annual run of shad (a kind of herring ) from the sea to the fresh water of  the upper Delaware in order to spawn.  In years past we have seen boats anchored against the down river flow, fishing for shad but there were none this year.   The festival was earlier than when I last saw it and perhaps that’s a factor.  Anyway, it didn’t affect the festivities, with crafters and special-interest booths lining the street,

People sat along the river’s edge and enjoyed their lunches from many food vendors which included … shad sandwiches.  They enjoyed the cooler temperature along the river, and people-watched as others moved back and forth between Lambertville and New Hope.

I was pleased that the judge awarded one of my images an Honorable Mention at our monthly meeting.  Here’s the picture, one taken during my photography field workshop in the northern Catskills last winter.

Each month there are assigned competition categories for prints, slides, and digital projection.  Last night’s print subject was winter or snow scenes in monotone.  Compositionally, this image features a gentle s-curve which leads the eye into the picture.  Also, there are near ground, middle ground and far elements.  I also entered the following image, a favorite of mine taken in Prague in January of 2004.  I was standing on a small porch off the lobby of the Four Seasons, looking across the Vltava towards Prague Castle in Hradcany.  This image didn’t make the judge’s cut but I’m awarding it my own Honorable Mention.  At my age, one can do that.

We watched a girls’ high school varsity Lacrosse game Saturday afternoon between heavily favored Ocean City and the new-to-Lacrosse Haddonfield team.  With some kids that had never held a stick before starting this team, they gave a good show, losing only by one goal (13-12) in overtime.  Lacrosse has its roots in Native American culture, dating perhaps, as far back as the 12th century.  Fortunately, today’s games are somewhat more restrained than in the Indian culture where each team could field up to a thousand men on a field that might be up to two miles long, for a game that  lasted from sunup to sundown for two to three days straight.  Here are some of the girls poised for the faceoff.

My granddaughter playing here spends the summer in competitive sailing, the fall in hard soccer, and the winter in aggressive basketball.  Now, it’s time to be knocked around in Lacrosse, and here she is helping to keep an opponent from the goal. 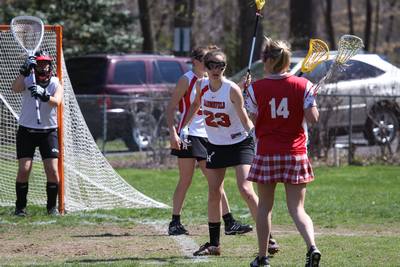 and running the ball down the field.

Whilst our team’s goalie stands ready to protect our goal.

CHARLESTON AND THE LOW COUNTRY

A PHOTO VISIT TO CHARLESTON AND THE LOWCOUNTRY

I’ve recently returned from four days in Charleston and at some of the surrounding Lowcountry plantations.

I spent two days with four other photographers in a field workshop under the direction of Richard Bernabe.  He is a renowned scenic and nature photographer with over 7000 publishing credits.  He is the author of South Carolina Wonder and Light, Editor of Nature Photographers Online Magazine, and a principal of Mountain Trail photo, publishers and workshop operators.

These workshops expose one to new venues (not much Spanish moss or Camellia in the Pinelands), and compel the practice of disciplined photography scene after scene all day long.  One has to think for each shot about subject matter, composition, lighting, zoom, focus point, aperture and depth of field, and exposure values.  Then (fortunately with digital), one can examine the shot immediately for blown out highlights, lack of shadow detail, exposure brightness, fuzziness…….  and adjust and shoot again if necessary.  Workshops are also an opportunity to discuss hardware and software with fellow gearheads.  It was a good experience; I enjoyed the scenes we saw and my fellow photographers.

We began a dreary, threatening Saturday morning in the Audubon Swamp Garden, a part of Magnolia Gardens.  Here we captured some Great Egrets doing their mating dances in full feathery plumage, as well as Great Blue Herons, a gator, and Anhingas.

Then, into the adjacent Magnolia Gardens, lush with azaleas, camellias, great Live Oaks and Spanish Moss.  The plantation was created by Thomas Drayton along the Ashley River in 1679.  His son, John, eventually created Drayton Hall (described below).

After lunch we visited the Angel Oak, a Live Oak (Quercus Virginiana) that is a native species found throughout the Lowcountry,  This tree, on land owned by the Angel family at one time, is thought to be some 1500 years old and has branches which extend over 90′ from the trunk.

We closed the day in a hard storm at the Grove Plantation, an 1828 mansion along the Edisto River, that survived the Civil War.  The approach is lined by moss-laden Live Oaks, and one half expects Scarlett and Rhett to appear beyond the next tree.

We finished the day in sunny, downtown Charleston with its attractive doorways and interesting homes and gardens.

I stayed on for two more days to revisit some favorite places from past visits.  I began, however, by returning early to the Audubon Swamp Garden, now almost deserted compared to Saturday morning.  I encountered only one birder and one other bipedus photographus, and another nice image, a family portrait.

Then off to Middleton Plantation to photograph their azalea hill which I photographed six years ago.  It was worth it.

I finished the day and the trip with my fourth visit to one of my favorite places, the National Trust’s Drayton Hall on the Ashley River.  Begun in 1738 by the 22-year-old John Drayton it is considered one of the few surviving examples of 18th C. Georgian-Palladian architecture in America.  It is a striking building, sitting alone above the river.

The interior is an architectural museum as it is unfurnished and undecorated.  One sees only the mansion that Drayton created, unobscured by the trappings of any particular period. 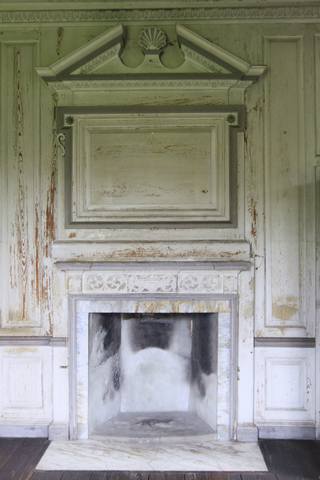 This has been a long blog but it was a wonderful trip.  Take another coffee break tomorrow and look at some other selected images.