No landscapes today.  It has been a day of memories and nostalgia.  My father, LeRoy, served in France during World War I and I have been thinking about him.  Here he is with some of his buddies:

He didn’t waste much time after the November 1918 Armistice as he married my mother-to-be on May 30, 1919. The next day, Memorial Day, ninety-one years ago today, they enjoyed a picnic at Lenape Park at Mays Landing, NJ where the above picture on the right was taken. I’ve always thought he had a cat-swallowed-the-canary smile.

Partly because of that first visit, Lenape Park became a family destination on Memorial Day for a picnic for many years. In my grammer school years the day began with a parade from the Granville Avenue School in Margate to the War Memorial on Ventnor Avenue at Mansfield. Yep, that’s Bergie carrying the flag, all serious, and giving his best side to the photographer. 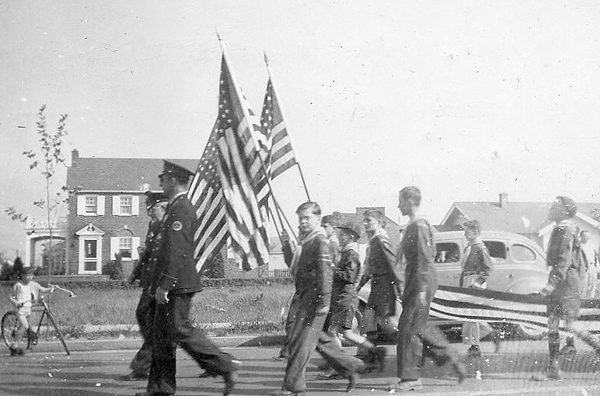 Then, if the weather were decent and it wasn’t always, off to Lake Lenape for a picnic, swimming, canoeing, and merry-go-round rides. In later years we tried it again, maybe twice after marriage. The scene below was taken at Lenape Park, probably pre-1959 (no kids visible), with Marty Lou, me, my parents and the dog, Snippie.  It wasn’t a nice day as I recall and it certainly doesn’t look like anyone else was there, either.  I almost drove down there today to try and reconnect with the past but I didn’t. 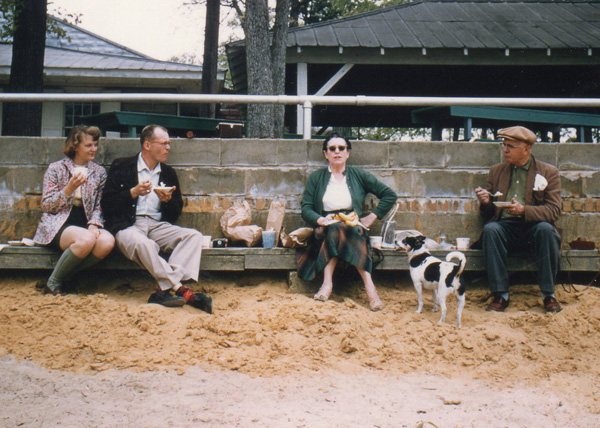 On Memorial Day I also think about my brother, Bill, who, as a marine artillery forward observer, was part of the first waves of most amphibious landings from Guadacanal to Kwajalein.  He had become an atheist in college but during and after the war he said, as did others, “There are no atheists in foxholes.”  I spoke with him once, expressing my awe at what he and thousands of others endured, wondering whether or not I could have done it.  I think the answer is that one does what one has to and we’ll think about it later.  In any event he unpredictably wound up as the Reverend Berglund.  He left us in 2005 and I miss him.  My memorial for him is here. 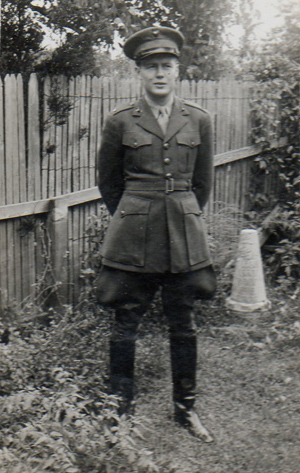 Above is a scene from my recent (fourth) Catskills trip.  It’s called Bridal Veil Falls and it’s located behind the Glen Falls House (Round Top, NY) where we stay during the weekend trips.  I’ve photographed these at the top but never worked up the enthusiasm to climb down the steep, tripping-root-filled path and cross the rock filled stream bed (my tripod and I are in the stream for this shot)  particularly when the path has been icy.  But, it was time to do it.

Our weekend  was organized and led by fellow blogger  Denise Bush, who keeps finding new vistas as well as taking us back to favorite spots to be seen again in different light.

Here’s a tranquil shot of a lake bounded by willows and birches and by the Catskill range in the background (not seen in this image).  I was looking on this trip for something other than the streams and waterfalls, and I liked this place.

After you’ve photographed a particular scene it always pays to look behind you to see what else might be there.  That’s how I captured the scene below, which is the creek continuing on from Artists’ Falls, with the old mill bathed in leaf-green soft light.  For more images from the weekend click here.

The stream and mill below Artists' Falls.

This is a soft, beautiful time of year with the trees leafing out, still feathery, and the abundance of spring blooms.  This rhody was condemned to death by one of my landscapers years ago as suffering from a borer.  I refused to carry out the sentence and the rhody recovered and for many, many years it has been magnificent.  Here is a closeup of one of the flowers.

Here’s one of my peonies.  So beautiful and gently fragrant.  I lost every bud last year to an unknown cause.  Only a few buds this year but welcomed back.

The clematis over Marty Lou’s arbor seems to struggle every year but it persists. 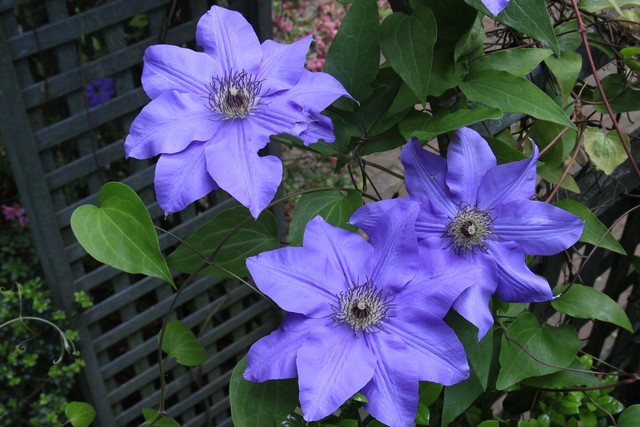 This morning I had a real treat.  I was invited to tour and photograph the gardens of Kathy, a fellow photographer.  I was overwhelmed with this Longwood Gardens annex.

It was view after view after view of iris in all colors and all manner of blooms from stately bearded German to delicate Japanese.  In between, several varieties of clematis on attractive garden trellises, and  rosebushes beyond count.

And the first peony, just unfolded.

And, an honor: while we stood and chatted by Kathy’s hummingbird feeder not eighteen inches away from me, up came a hummingbird who hovered, looked at us, and then proceeded to have a sip.  I felt honored.

I recently attended a field workshop in the Great Smokies sponsored by Mountain Trail Photo under the leadership of Richard Bernabe, one of their principals.  Mountain Trail is a publisher of photography books (over 800,000 sold) and an operator of nature workshops all over the country and soon to be in other parts of the world.  I toured Charleston and the Low Country with Bernabe a year ago, and Vermont last fall with Joe Rossbach, another noted nature photographer in their group.

A Cascade Along Porter's Creek Trail

I  joined eleven pleasant others from all over the country and enjoyed the experience immensely.   We broke out early (on the road at 6:20) to try and capture sunrise across the ridges of the Smokies with fog rising from the valleys.  The first picture above is one result.  There were perhaps another two dozen photographers at that vantage point and they had a table set up with coffee and sweet rolls.  (We didn’t.  Have got to get the name of that outfit.)    During the day it was mountain streams, falls and cascades, and wildflowers.

One day there was too much sun (if you can believe that) which makes for two much contrast between light and shadow when shooting nature scenes.  So, Richard had us studying the reflections of the trees and the sky in running streams.  Some interesting results. 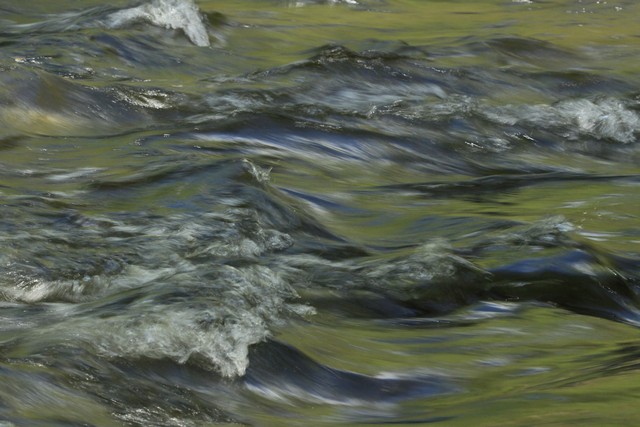 Reflections of Sky and Tree Leaves

Finally, at the end of the day, we sought the sunset from Newfound Gap Road.  The first night it poured although we dutifully stayed on scene in case the clouds might part.  They didn’t.  The next night was more rewarding as you can see  below.  In years of shooting sunsets I’ve never seen one cloud puff outlined as though on fire itself.

There are a few more images of wildlowers, cascades, some nice scenics, and snapshots of our group at work at my galleries.  Click here.

A Cloud On Fire