BACK ON THE WATER AGAIN, AND AT DOWNBAY 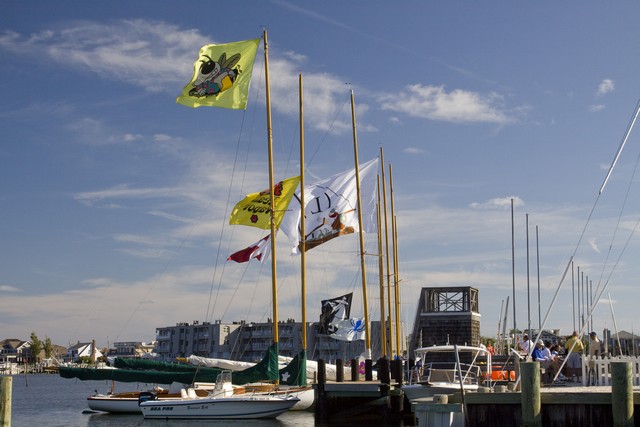 It’s been a long, long story but I’m back on the water for the first time this year, and it’s great.  Here are the colorful A-cat sail boats tied up at the Little Egg Harbor Yacht Club in Beach Haven for the annual Downbay Regatta.  There was a healthy 10 knot wind from the east that swept out the humidity , created  glorious skies, and snapped the A-cats’ flags.  What a great morning to be alive! 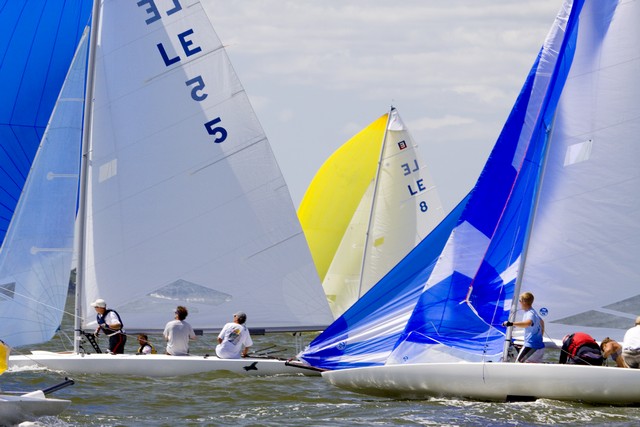 In close quarters and trying to break out after the turn.  Grand color skimming over the chop.

Five of the A-cats headed downwind. 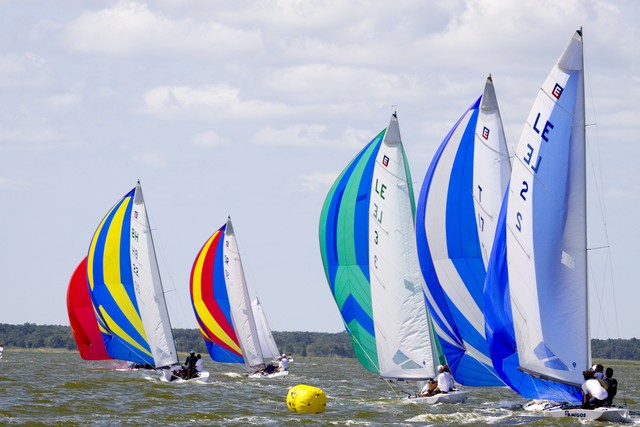 My best shot of the day!  I feel photographically rejuvenated, and reinvigorated from returning to Mother Water. 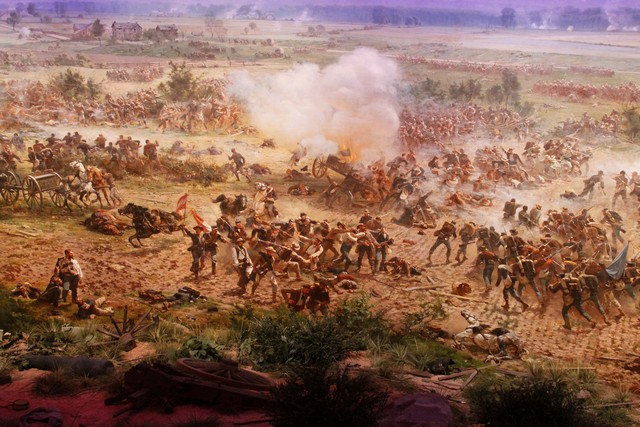 A part of the cyclorama view of Pickett’s Charge

I’ve been itching to return to Gettysburg and I recently scratched the itch.  I went there many years ago and became caught up in the history of the three-day battle, and moved by the quiet drama of the fields and ridges, and by the memorials erected throughout the park by individual regiments and states.  I went first to the new (2008) Museum and Visitor Center.  There one can see a movie providing an overview of the three days, and a powerful cyclorama painting.  The 1884 painting is 359′ in circumference and 27′  high.  With a 3D feel to it, it illustrates Pickett’s July 3rd charge of 12,000 confederates across the fields to the Union’s line at Cemetary Ridge.  Only some 4,000 troops reached the line and they were repulsed.  It is a vivid portrayal of the confusion and violence of the battlefield.  (For my photography colleagues, this image was made at ISO 3200 in the darkened theater, mounted on a monopod resting against the railing, and at f/8 and  1/15th.)

I then took a guided bus tour of the battlefield which gave me an overview on the basis of which I could then drive through myself .  Amazingly, for a late July day there was very little private automobile traffic through the park which made it easy to drive to selected sites.  It was not a good day photographically because of the summer sun and haze but I was as much interested in capturing a feel for the battlefield, whether or not the images would pass a judge’s scrutiny.   After all, the battle was fought in the same July heat. 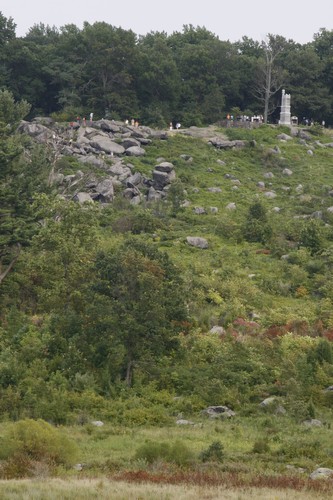 Above, 150 feet high Little Round Top hill, is the site of probably the second most vicious battle of the three days.  On July 2nd, General Longstreet ordered his troops to sweep northerly to mop up the Union’s left.  Little Round Top, the anchor of the Union’s left, had been left undefended and Longstreet’s troops were approaching from the southwest to flank this end of the Union line.  General Warren, Meade’s Chief Engineer, had been dispatched by Meade to investigate the situation.  Warren saw the Grays’ bayonets sparkling in the sun and immediately sought other units from the Union line to defend the hill.  One such unit was Maine’s 20th under Colonel Joshua Chamberlain.  After repulsing three charges in 90 minutes his men were low on ammunition.  Chamberlain then ordered “Bayonets!” and his men streamed down the hill in a frontal assault that caused the Confederates to leave the field. 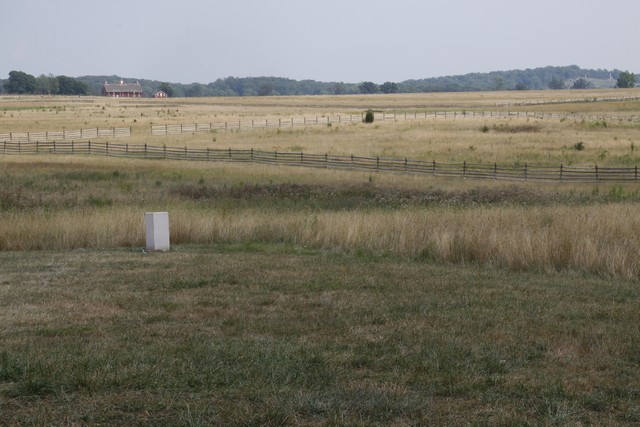 The fields between the forces.

Above, I’m standing on Seminary Ridge where the Confederate forces had massed for the charge, facing ESE at Cemetary Ridge where the Union Forces awaited.  The charge was preceeded in the late afternoon by two hours of  an artillery fire exchange: acrid, stifling smoke, pounding and death.  Finally, the 12,000 Grays marched towards the 4,000 Blues.

On the left is the Codori farm around which the charge surged, which can also be seen at the left of the cyclorama image.  On the right is Little Round Top which was the Union’s  anchor on its left.  The charge was eventually repulsed, leaving the fields you see above strewn with fires and the dead and dying.  Lee, mounted on his horse, Traveler, greeted his dispirited and shattered forces as they returned across the fields.   “It is all right, men. It is all my fault”, and it was Lee’s greatest military mistake.  On the following morning Lee’s army headed back to Richmond.  General Meade who had won the victory then made probably his greatest military mistake by not pursuing Lee’s army.  Had he done so the war might have ended two years earlier than it did. 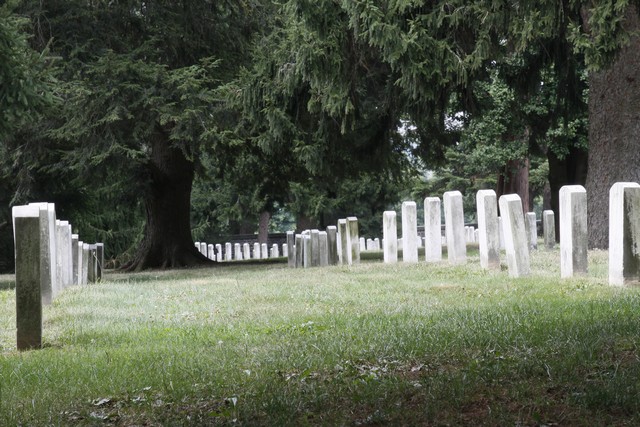 The inevitable and tragic result of combat.

For more images of the battlefield including a panorama view from Cemetary Ridge please click here to visit my gallery.