BACK IN THE CATSKILLS AGAIN

A panoramic view of the lake along South Road by Glen Brook Farm at Roundtop, NY,  a favorite shooting location for our three-season visits to the Catskills.  If you click on the above image you can see it full size.

I recently spent a fun weekend with fellow photographers in the vicinity of Round Top, NY, staying at the Glen Falls House as a base, and venturing into surrounding areas, chasing the light.  The group included shooters from the South Jersey Camera Club, the Cranbury Digital Camera Club, and the Ocean County Camera Club.  As in the past the locations were pre-scouted and the group led by SJCC photographer Denise Bush.  Having been up there in several previous seasons I tried to find new scenes or perspectives as did others.   Looking at some of their creative-eye results I am frequently left wondering “Why didn’t I see that?”  But, that’s part of what makes it interesting.  Click here for some additional images in one of my galleries.

The Glen Brook Farm lake (the pano above) has frequently been a first stop.  It’s a beautiful spot with birches and willows and — viola — the Catskill mountains.  Here are two scenes on which my mind’s eye focused. 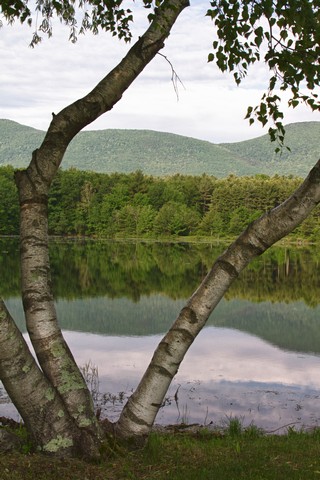 Another place we visit is the All Souls Church.  Because of a blah sky and too much contrast between the church and the sky this image will be useful as a Gothic novel cover.

Another favorite spot is the mountain-top mansion of Frederick Church, a principal figure in the Hudson River school of landscape painters.  The mansion, called Olana, is named for a fortress-treasure house in ancient Greater Persia (modern-day Armenia), and incorporates Persian, Moorish, and Victorian architecture themes.  The different view this visit: the Coreopsis in the meadow below the house.

Off then to other pretty scenes.  Below is Bastion Falls which I had only previously photographed from Route 23 which passes it between Palenville and Haines Falls.  This time we climbed down into the path of the water under a Route 23 bridge.  There wasn’t much water flowing so we could do this and it provided a great perspective.

In another field which beckons us every trip I walked out and into a grove of birch trees.  The scene below was captured by moving my camera vertically with a  1/3 second shutter speed.  I then converted it to black and white.

At Bastion Falls I found the sight and sound of the falls so restful that I recorded a minute of it.  It helps me recapture the feel of the moment.  Please enjoy some of it.

The Little Egg Harbor Yacht Club held its commissioning ceremonies Memorial Day weekend to officially open the season.  I’ve reported on this before (May 2009) as it is an important event for me.  It includes the flag raising and pledge of allegiance, the blessing of the club’s season and of its fleet, the introduction of  past Commodores (twenty-two present, the oldest from forty-five years ago), a moment of remembrance for deceased members, and a cornet solo of the Navy hymn.  This is a celebration that has been going on in one way or another for 99 years at a club house that is only four years younger.  As Tevye would say, “Tradition!!”

But, it’s not all serious; the socializing after the ceremonies (How was your winter?) has been referred to as “Drink your dues night.”

It’s the beginning of a busy season of partying, competitive sailing, tennis, fishing, and even bocce, and the book club, the weekly bridge group, the art group, Happy Hours, a summer art show, various community benefits, a full junior sailing program culminating in the omlette breakfast, and, and …..     All of this is enumerated day by day in the annual club calendar, looked forward to and delivered to members at the club opening.  In addition to the day to day schedules it’s filled with snapshots from the past season, plus formal group shots of the past commodores, the trustees, and the year’s  officers  which I take at the end of the previous season.

In addition, in my ten years of membership I have been privileged to have my work selected for four calendar covers.  I consider it an honor and I am pleased to make some contribution to the club.  Here are my four covers.

This view was taken as we approached the clubhouse one night after a twilight sail.

Followers of this journal will recognize this image, also captured during a twilight sail a few years ago. 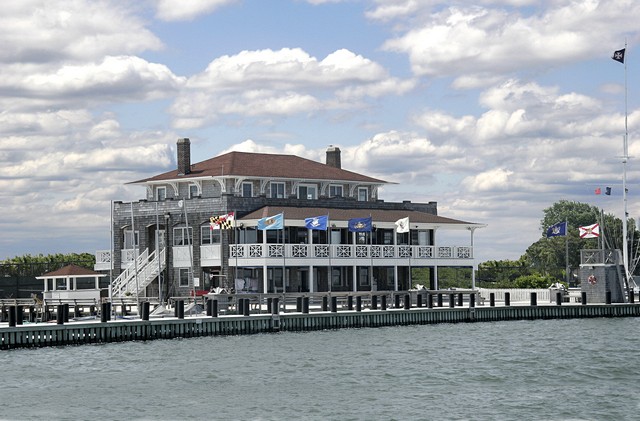 A great waterfront shot of the clubhouse with the wind whipping members’ state’s flags, and a bright puffy-cloud sky to set the tone for the 2006 season.

For the 2005 calendar the editor (an annual task for that year’s vice-commodore) wanted to underscore the sense of tradition which the club honors.  He chose this opening ceremony shot  from 2004.