Ricketts Glen is a 13,000 acre Pennsylvania state park west of Scranton and north of Bloomsburg, about 30 driving miles easterly from Eagles Mere.  It features some 22 named waterfalls along Kitchen Creek which flows down the Allegheny Front escarpment.  I’ve heard about it over the years as a photographic destination, always with the caveat that it’s physically demanding.  Our South Jersey Camera Club field trip co-chairs, Pat W. and Larry L, decided to schedule it for a field trip, and drove out there to scout it out.  Based on that visit their plan was to leave a couple of cars at the bottom of the trail so that we could avoid having to climb the 953′ back to the entrance lot.  Good thinking.

SInce it was a four hour drive there they decided to spread the trip over three days in order to be able to spend a full day in the park.  The first day would take us to some covered bridges en route which Larry and Pat had discovered.  The group left very early the first day and headed for the bridge country.  With age my enthusiasm for such early starts has diminished so I left later after a pleasant breakfast and civilized early morning.  Using Larry’s lat-long coordinates I arrived precisely at the first bridge which was in the middle of a pleasant nowhere.  I enjoyed the bridge on my own but it being late morning the sun was not helpful…lots of glare and bright spots especially from its aluminum roof.  I worked around and came up with this which I liked.

I moved on and came upon the rest of the group (nine colleagues) trying to make lemonade out of the bright sun at the second bridge. This property, adjacent to the covered bridge, was more interesting than the bridge, and was more workable in the bright light.

We then headed off to our intended lodging to rest up before trying some sunset and night shooting.  Arrangements had been made at the Crestmont Inn at Eagles Mere, PA.  My family and I had stayed in the original 1899 inn in the sixties.  Besides the mountain trails and the swimming beach one could also join in Sunday night hymn sings in the parlor (no TV so no Ed Sullivan).  The old inn deteriorated in the 70’s and was torn down in 1982, to be replaced by a structure of condominium residences.   Two of the original out-buildings were then converted into suites and dining rooms which we enjoyed for two nights.

After recuperating from covered bridge stress we headed out to High Knob in the Loyalsock State Forest to shoot the sunset.  The night was clear and that doesn’t make for dramatic sunsets but the colors and cloud forms were still beautiful.  (Tech note to colleagues: this was made more dramatic by under exposure.)

When the residue of twilight was gone we looked to shoot the Milky Way as colleagues of ours had done the previous week in the Adirondacks.  This was disappointing as it just wasn’t dark enough to have the Milky Way jump out at us.  But…good practice.  I do have a shot of the Big Dipper should anyone have forgotten what it looks like.  We returned to the inn where the innkeeper had arranged to provide us with a fine late supper.

The next morning the rest of the group felt it absolutely necessary to get to the Glen early.   First, I enjoyed the innkeeper’s delicious breakfast and then headed off to join them which I did when they were about one-third down into the Glen.  But, here’s where not staying with the group almost added to my work for the day.  They had told me there was a “left” trail and a “right” trail, and the left was the easier and even had steps along it.  So, I marched out of the parking lot and took the trail on the left, marked Highland Trail.  On the trail I stopped and chatted with a ranger who was working on signs.  He advised me that there were no waterfalls on the Highland Trail, but shortly after that there was a marked shortcut to the Glen Leigh trail along the falls where I caught up with the group.  Here is typical of what we encountered over the rest of the hike.

This video will give you a better perspective on the falls at almost each level.

The trail?  Hmmm, THE TRAIL!  The “left” or groomed or easier trail was a 4.4 mile hike.  I never did that even when I was a boy scout.  It was steep, narrow, rutted with rocks and roots, and slippery from damp mud and wet leaves.  As promised there were a few steps here and there:  steep, high risers, narrow, no railings, and also slippery.  I kept hoping that the next turn would lead to the down escalator.  I would frequently see my colleagues far below and wonder when we would get to the bottom, hopefully not having slid to there.  In many narrow sections I wound up holding on to branches or even to tree roots exposed along the side of the narrow ledges.  My tripod served as a vital walking stick.  One place was so narrow that they had even installed a 2×10 edging plank.  I don’t know what it would have stopped.  Here’s another example.  The log wasn’t part of the trail but the trail, right next to this flow, wasn’t much better.

This went on for much of the 953′ of elevation down which we climbed, with “flat” trails only up at the entrance and down at the end.    Here and there among the vegetation was something to compete visually with the falls, thriving on the constant moisture and dappled light. 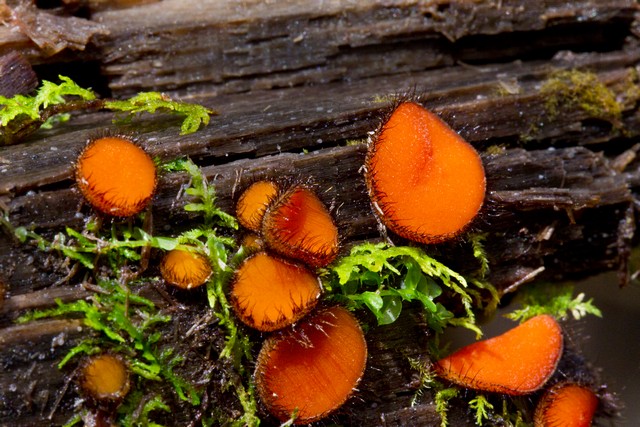 Still the engineer at heart I calculated that I had lost some 185,000 foot-pounds of energy in climbing down through the Glen.  Conversely, I would have had to expend that much energy to hike back up.  I deferred to the waiting automobiles.

As usual, glad I did it; glad it’s over.