I recently passed a nice anniversary.  My first blog post was on February 10, 2009 so this past February marked five years of blogging.  Encouraged by colleagues Denise Bush and Terry Wilson I jumped into the WordPress world and, suddenly, it’s five years later.  I’ve enjoyed it very much.  I’d always wanted to write and the blog gave me an opportunity less intimidating than a book or even an essay although there has been at least one of those*.  Serendipitously, the blog has been a place to display some of my photography which, in turn, has provided a raison d’etre for the writing.  What a happy fit.

On the photography face of the coin here’s a recent image.  These are about 8″ tall and I used to have to lie down to shoot them horizontally.  That’s become too demanding so I have a new toy called the CamRanger.  It plugs into the camera and transmits the camera’s view and settings to my Samsung tablet so I can focus, adjust the other settings and take the shot while standing or sitting comfortably nearby.  Ahhh, technology.

Writing has been a demanding Muse.  First comes the anxiety of not having posted for a while; then there’s the anxiety of what to write about; finally there’s the anxiety of whether what I’ve written is worthwhile.  I may start out holding on to a steeeep slope but as I get going it always seems to evolve such that I feel good about it.  My recent Hawaii travelogue was one such post … today we went here and then we went there etc.  But, it evolved comfortably for me.  I’m reminded of bird carvers who say, “The bird was inside the block; I just had to cut away the rest of the wood.”    This post on the other hand has been fermenting and has rolled out easily.  For any post a first draft eventually appears but then it is a process of review-correct-add-change, and then do it again.  Each post gets reviewed and tweaked several times and yet, amazingly, I’ll reread an old post and find a typo or grammatical error.

The stats?  166 posts by the anniversary date (four more since then), over 900 images along with five audio clips, a short poem (The First Beach Nap of Summer),  a handful of videos, and over 32,000 views.  About 5% of those have come from seventeen foreign countries across all continents except Antarctica. My colleagues have had more views but my count is probably because the blog is more of a journal than a pure photography blog.

My all-time most popular post is Selected Beach and Sea Images With Sound Accompaniment   That surprised me but also pleased me since I have such a bond with the sea.  Two others that continue to draw readers are Charleston and the Low Country, and The 18th and 19th Century Fairmont Park Houses.   Both of those lost out, however, to my three-post series on Hurricane Sandy, which drew a broad audience because of its news nature and its fearsome effects.

I find (and confess) that I enjoy my own work; I frequently scroll through old posts and re-enjoy a phrase or a sentence or paragraph.  Who among us is without some narcissism?  From time to time I’ll copy some of that and save it in a special folder which might …might … yield a book one of these days, of selected images and comments.  Anyway, it’s been fun and satisfying and I hope to keep cranking them out.  As long as I don’t run out of film …  or words.

Thanks for reading this!  How about a closing image?

*  The one essay that I wrote is included as a page (tabs at the top of the home page) rather than as a general post, and I originally only circulated it to some of my photography buddies, seeking their thoughts.  It had to do with coming to terms with my disappointment with what I was shooting.  It’s entitled A Photography Phunk – An Essay.

Vacations can be educational, entertaining, enlightening, exciting, maybe even euphoric in parts.  This one was all of that but it was also exhausting because of all of the sightseeing and the long flights.  Hawaii, however is above all else wonderful and well worth the effort.  The scenery, the culture, the people, the flowers and the music are gentle and beautiful.  Here is what we enjoyed with our morning coffee on our balcony overlooking Waikiki Beach.

We had flown in to Honolulu and spent the night, boarding our cruise ship the next day.  The ship headed out that night for a seven day inter-island cruise. 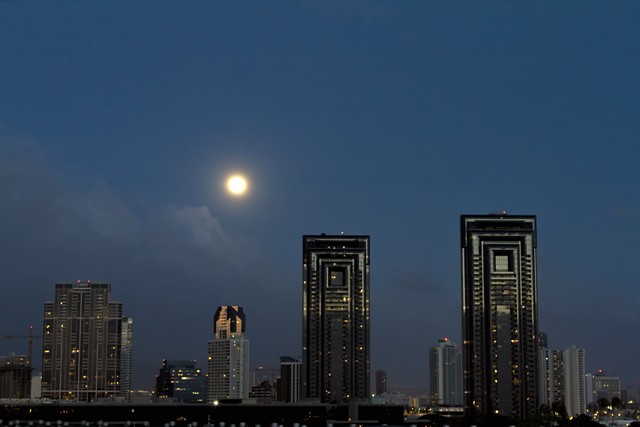 I had taken such a cruise in 1997 aboard the U.S.S. Independence, a handsome, Gatsby-like throwback to the days of luxury cruising, with largely open sides on the common decks (closable in bad weather) such that one felt more a part of the sea and the islands.  Now, a modern, plastic cruise ship with six dining rooms plus buffet, and seven bars (not sure we made it to all of them).  The soft background music throughout the ship was gentle, mellifluous Hawaiian, and the screechy loud noise that defines pop music was limited to the pool decks ( I know, I know…showing my age).  In any event I think the inter-island cruise is the best way to get a convenient, easy taste of several of the islands.

After a bumpy and rocky overnight cruise we pulled in to Kahului on the island of Maui for a two day visit.  I was relieved that I wasn’t the designated pilot.

The first of several day tours took us to the Iao Valley State Park where we viewed the lush vegetation, rain-swollen streams and waterfalls, and foliage covered volcanic mountains.  The Asiatic architectural motifs relate to the arrival of Japanese farm workers beginning in 1868 to work the cane fields.  By the time that World War II broke out there were some 41,000 Japanese residents on the islands. 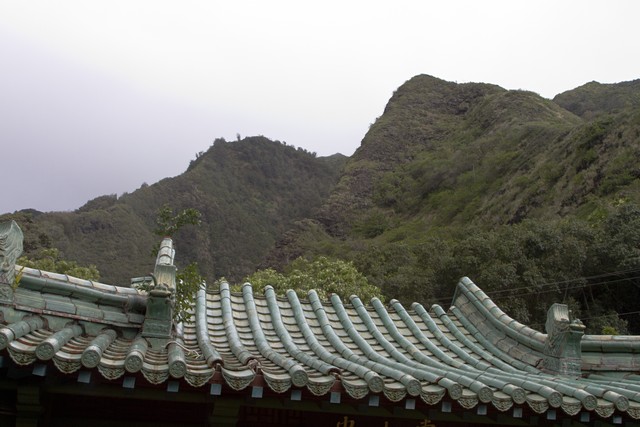 We also enjoyed the Maui Tropical Plantation with its cultivated displays of island flowers and foliage, some of which we’ve enjoyed at locations of comparable climate.  The Heliconia below (commonly, Lobster Claw) is an example.

Then, off to Hawaii, “The Big Island” where we tied up at Hilo the first day and Kona, the second.  More tours?  You bet.  A day long outing took us to Volcanos National Park on top of Kilauea Volcano, ranked among the world’s most active volcanos.  The crater rim road took us along the caldera  from which steam and fumes escape from molten rock in the Halema’uma’u Crater below.   In 1997 one saw hot lava pouring into the ocean from a lava tube draining the crater, dramatic as we cruised past at night.  Kilauea is regarded as the home of Pele, the Hawaiian volcano goddess, and she is apparently not presently upset ….maybe just a little steamed.

This landscape is tough for a landscape photographer.  All of the islands were created as volcanos pushed up from the sea floor, beginning some 5 million years ago (Kauai) and continuing to Hawaii, itself, about half a million years ago.  Continual eruptions of lava and volcanic ash add “land” and elevation to the islands.  The ash provides a soil in which drifting or bird-deposited seeds can establish themselves.  Meanwhile, it is a harsh environment.  In such context the islands’ history of sugar cane and pineapple is impressive.  Incidentally, sugar cane lost out to producers closer to demand, and labor costs drove pineapple to the Philippines. 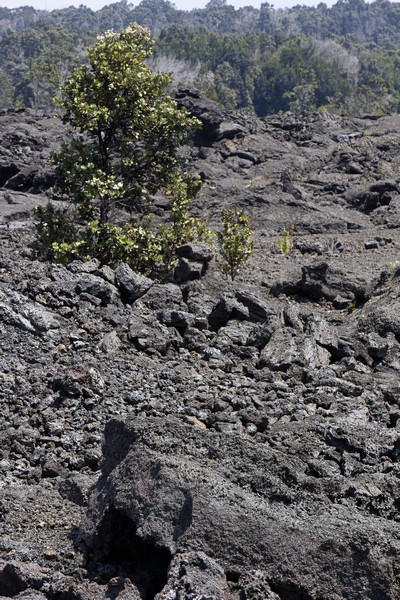 Other days, other ports, other tours, other beautiful spots, and bussed back to the ship late afternoons, weary from the day.  One hears that cruising results in weight gain because of the food services.  Au contraire, we lost two to three pounds and we think it was from the daily touring.  It was a relief and a pleasure to sit on our balcony and just enjoy a little cruising.  Here’s a short clip to try and give you the feel of it all, enhanced by Richard Rodgers’ stirring Song of the High Seas.  (Speakers on?)  In my Navy days we called this kind of thing shipping over music.  It was thought it would make one nostalgic for days at sea and want to reenlist.  (I’m still vulnerable.)

On the last afternoon of our cruise we passed Na Pali Coast State Park, one of Hawaii’s many dramatic sights.  It’s located on the northwestern edge of Kauai and is extremely difficult to reach on its land side.  The scenery may well be reminiscent of Jurassic Park as much of that film was shot on Kauai.  It was a powerful scene.

Minutes later the wispy clouds moved to give us a magical effect. 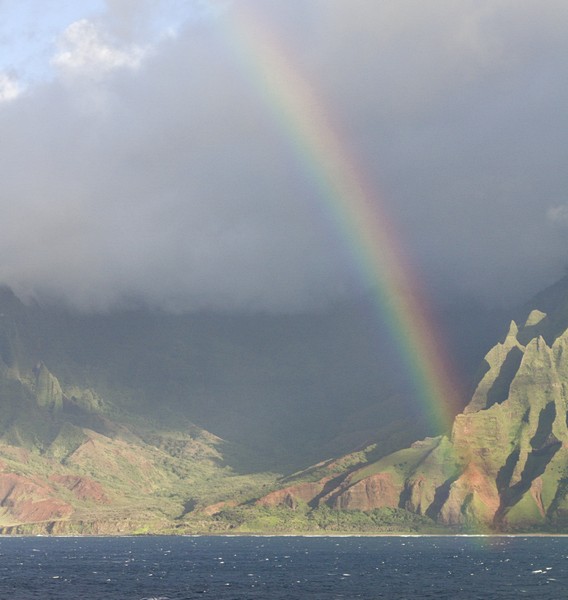 After which we began our return to Honolulu.

Back in Honolulu for a few more days we continued sightseeing but with a much reduced intensity.  We spent an afternoon touring the Pearl Harbor memorial complex which was a sobering, poignant experience.  We also toured the palace, last occupied by the last ruler of the Hawaiian royalty line, Queen Liliuokalani, forced from power in 1893 by the islands’ agricultural interests supported by the U.S. Marines.

And as the sun sailed away and our ship sank slowly in the west, with the last drop of the last drink of the last cocktail hour of vacation we bid farewell to our vacation in Paradise.  With the beautiful Hawaiian word for “thank you” we say mahalo (ma-hah’-lo) for visiting this lengthly journal entry, and we say Aloooha!

There is a gallery of these and more images of the trip.  Click Here.