THE PEACE OF FALL

I’m having my last morning coffee for the season on my little deck overlooking my beloved bay.  I continue packing today and Sigrid will be here tomorrow to help me move back to the winter cave.  I have been up there a couple of times since Labor Day and I miss my bay vistas up there. 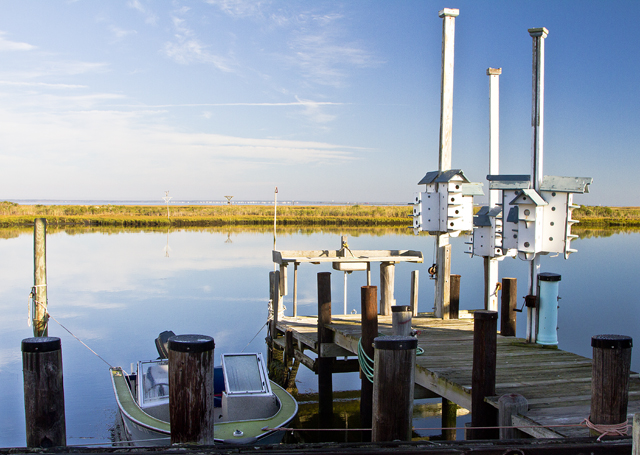 The early sun is September-warm.  The air is still, so much so that reflections of the fragmites plumes are clear in the water.  I hear a cricket and a few bird calls, now a flight of honking geese.  The marshes are cinnamon with still some thin washes of pale green, resting comfortably, their essence moving into their roots to survive the winter.  A lone fisherman drifts slowly with the tide; another passes, speeding south, the boat’s reflection in the still water traveling with it.  They are too far away to hear; a blessing this morning.

Few are stirring here.  One goes out and returns with a paper.  Please, just look around right now, not at the paper.

Life, of course, continues down here but at a greatly reduced level.  Next weekend is the annual Chowda Fest after which it’ll get really quiet.  Then the speed limits will rise and the traffic lights will go on blink.  For those who stay, their essence is also moving into their roots to survive the winter.  The Bagel Shack remains open to help with that.

Yes, there are no such vistas back home but life continues with friends, gatherings, events, meetings, projects, a fall getaway and probably a winter getaway.  December brings the winter solstice.  Since that marks the beginning of the sun’s return I’ve always thought of it as the first day of boating season.  That’s a nice thought.

A JOURNEY TO A DISTANT SHORE

Seeking a change of scenery, I enjoyed an August getaway.  This year I  returned to old haunts on Cape Cod.  For a few years in the 70’s our family vacations were taken at Chatham (inc. 1712) out at the elbow of the Cape and we loved it.  At one point I was even studying aerial surveys trying to figure out where to build a summer home but then I was drawn back to boating and the Chesapeake Bay and that consumed the next fifteen years.

In any event here was a sand-in-the-shoes kid leaving his summer shore and heading to another shore?  What’s up with that?  Well, a change of scenery and new image opportunities.   This image, alone, made the trip worthwhile but there were more to come.

That was taken from Skaget Beach (rhymes with stay-get) west of Orleans, and overlooking Cape Cod Bay.  The location had been suggested to me for sunsets by the generous proprietor of a Chatham print gallery.   I drove there twice, capturing the above on the very worthwhile second trip.  On an earlier trip I relived those 70’s years, watching families enjoying an August afternoon on the beach. 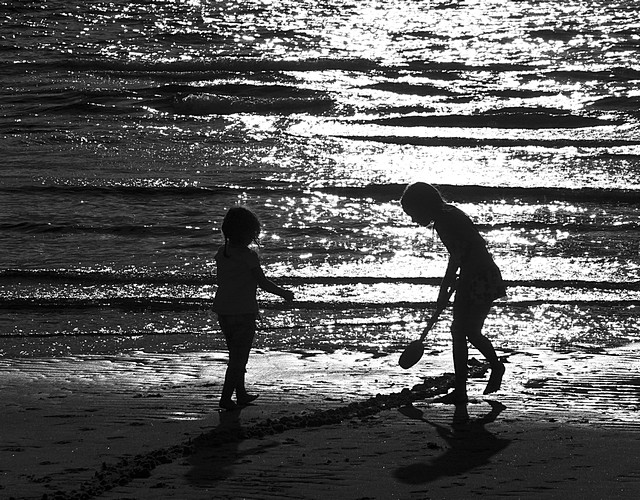 I based myself just outside of Chatham at a motel that I think was probably also a favorite of the pilgrims.  My daily routine began at sun-up at a lookout in front of the Chatham Lighthouse, overlooking Chatham Light Beach and the channel to the Atlantic’s fishing grounds, bounded by the Chatham Bar to the east.   Here is that scene.  (Techie Note:  A five vertical image panorama.)

On a small island of the Chatham Bar opposite me there was a great gathering of gray seals whose population has exploded off the Cape in recent years.  I could hear them grunting and greeting and probably complaining about the white shark population which has been drawn there to feed on the seals.  It is a matter of concern to the locals, and they’re even running scout planes in search of sharks near the beaches.  Shades of Jaws.  But, lemons to lemonade, one could buy cuddly sharks at some shops on Main Street.

Oblivious to sharks and other anxieties a group gathered every morning on the beach for yoga.  Here they are cheering the new day.

After the sunrise activity at Chatham Beach I would drive to Mill Pond on Bridge Road.   Here, the soft,warm morning light on a whisper-quiet pond was irresistible and I visited on several mornings.  The scene was disturbed only by the sound of my shutter.

Here’s the rattly wooden bridge (hence, Bridge Road) under which Mill Pond flows out to Stage Harbor and thence to the sea.

Within the pond boats lie on mooring buoys.

Others nearby also await the day’s assignments.

On my rambles around Chatham, Stage Harbor seemed like a good prospect for a sunset scene.  The harbor was first visited by Champlain in 1606.  He also stayed at my motel.  The name, suggesting a harbor to which stage coaches ran, is actually said to be derived from racks on which fish were dried.  In  any event, I drove around the harbor on a couple of evenings and was finally rewarded with this scene.   I was pleased with it because I was able to include the foreground marsh grass, and also to include several of the larger boats on their moorings as well as reflections and some dramatic cloud structure.

The days weren’t all sunrises and sunsets, however.  Daily I ranged from one end of the Cape to the other, enjoying the Sandwich Glass Museum, the French Telegraph Company’s 1879 transatlantic cable station, craft shows at Chatham and Eastham, Marconis’ early wireless station, Rock Harbor (inaccessible at low tide), the harbor at Wellfleet, and Provincetown.  There I visited with Jeff Lovinger, a great photographer whose work ranges from the Cape to the Far East.  I took a worthwhile workshop from him in 2010 and still keep in touch with a couple of F/B photo buddies from the workshop, Allyson Howard and  Patty Wright-Ferrini.  Jeff and his wife operate the Lotus Guest House and a pleasant little gallery on Commercial Street.  We sat in the gallery and talked about photography art and business while gentle breezes slipped through from the street to the harbor.  I then strolled around P’town which is interesting and charming.  This image sums it up.

Aside from the Cape Cod seashore scenes there’s also much to see which says traditional New England.

The Chatham Lighthouse holds a special memory for my family.  In one of those early visits I was admiring a gold ring at a craft show and my wife was urging me to buy it.  In those salad days we could only afford vacations with my annual tax refund from over-withholding, and there wasn’t much to spare.  I had an uncle, however, who had just passed away and I was the beneficiary of a small insurance policy of his.  My wife encouraged me to buy the ring with that and I did.  Ever after the ring (bright, shiny) was referred to as Chatham Light.  Here’s the real lighthouse, built in 1877:

My final memory of the week:  The dying embers over Cape Cod Bay. 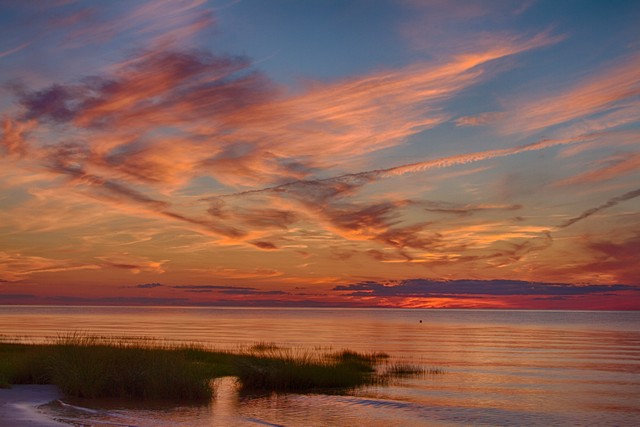 This has been a lengthy post and I appreciate your having read it and looked at the images.

For more images from the week  click here for the galleries.

A SEPTEMBER DAY ON THE BEACH

We’ve all heard it:  September’s the best month at the shore.  Weeellll,  yes and no. 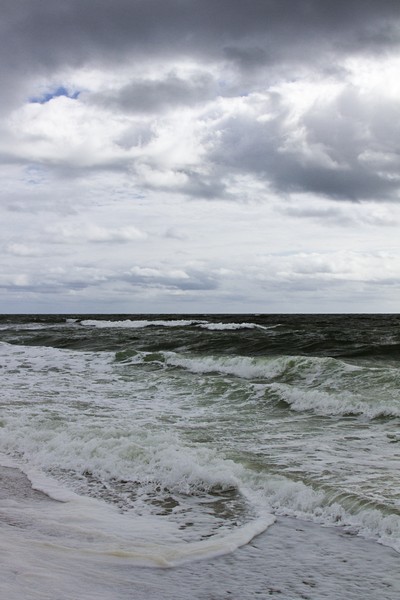 This morning’s forecast was for showers to be followed by steady rain.  We decided to get a beach walk in before the showers and although one’s tan wasn’t going to benefit, it proved to be an interesting, fun time.

We enjoyed watching a kite-surfer which is still on my bucket list.  I thought it would be a shoo-in for the competition category, “Stopped in Mid-air”, but he left the water too soon.  Here he is trying to put it away, a lot of work.

There were others enjoying the no-rain morning, and the water, though rough, was comfortable.

There were a couple of guards on duty (through 9/14) and I imagine they were grateful for something to guard.

As Barbara remarked, there were almost as many birds as people.  One of these was screeching, “OK you people.  Go home!”

There was also another old bird saying “Happy Season’s End.”

I’m also happy to note that in early September my photo galleries had their 500,000th page view.   Where do they come from???

These galleries were started on Pbase.com in February 2005.  Today there are some 4,400 images stored of which about half are public, displayed in some 170 galleries.

The home page for the galleries is http://www.pbase.com/bergiesplace