Oh, it’s a long, long while from May to December
But the days grow short when you reach September
When the autumn weather turns the leaves to flame
And I haven’t got time for the waiting game.

I get it … I get it.   Summer’s slipping away.  Fall is flexing its muscles.

The juvenile gulls are screeing for Mom to feed them, wondering what happened to the dole.

Each evening the sun slowly sneaks a little bit further south.  I’m watching you, sun, and I know where you’re going;  I’ll catch up with you again in January at Sanibel.  Meanwhile, the mornings can be hoody but the days are still hot to balmy.  The last-of-the-season vacationers have gone from the Bagel Shack every morning.  The Shack also put up plastic curtains around its outside eating area to ward off the early morning chill.

There are pumpkins and potted chrysanthemums at the Acme.

After the reds of sunrise the early morning photons are mostly yellow.  They paint the marshes, enhancing the glow the grasses have worked all summer to achieve.

The old Great Blue Heron basks in the copse on nearby Mordecai Island. I look at him thru the binoculars and see him looking back at me. He’s got the early morning sun; I’ve got the coffee; neither would trade.

Nor would I trade for the summer experience.

With family and friends it was a good summer.  Here are some memories:

The annual Twilight Sail – one of the best events of the summer.

Even on cloudy days the beach is still a place to be.

Storms are part of summer, indeed, of life, and they bring their own drama and stark beauty. 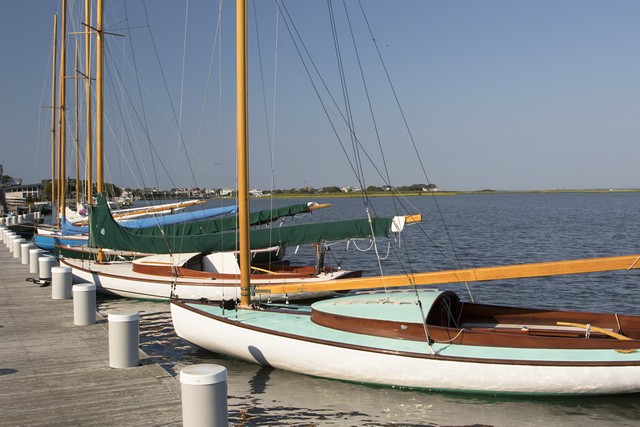 In mid-August part of the A-cat fleet arrived for the Downbay Regatta weekend.  Always exciting, and seven of them this year.

Summer brings fog as well, drawing me to …. where?

One day, friends arrived for lunch!?!

Our captain, Jenn, for the twilight sail.

On Labor Day afternoon the guards went off duty at the usual 5:00PM.  As they climbed the dune to leave the beach they turned, blew a long whistle and waved goodbye.  Those still holding tightly onto the sand and summer waved back.  I’m told this is customary in order to warn all that the beach protection was off duty.  On this day, however, marking the season’s end for the guards as well, it was poignant.

The day after summer.

Shucks, I guess the season’s over.

I closed with this image a couple of years ago.  I’m reusing it because it’s perfect for the mood.*

*There’s also a techy note about using Nik’s Tonal Contrast on this image  The note is on one of the tabs at the top of this post.