The Downbay Regatta is an annual summer highlight at Beach Haven’s Little Egg Harbor Yacht Club.   A many-yeared tradition, sailboats come “down-bay” from several other yacht clubs on Barnegat Bay to compete in their classes, i.e. A-Cats, B-Cats, E-Scows and Lightnings.  It is always colorful, always a weekend of camaraderie,  of renewing friendships, of hard-fought races, and not a little partying.  Although I had retired as the club photographer, my camera wanted to go take a look; what could I do?

The weekend opened bright, hot, and windy with some question as to whether there might be too much wind.  That was a new concept for a power-boater like me … too much wind to sail?!? Anyway, a great start for the weekend.  Here’s the traditional lineup of the romantic A-Cats, with two more on moorings out in the thorofare.

On the dock were the colorful “marks and pins” which are taken out to the sailing grounds and moored to mark the turning points of the various courses.

The harbor horn sounds … a kind of mount-up signal which triggers all kinds of boarding, and sail raising activity, some of it frenetic.  I heard lots of “Pull that line …. Jack, don’t tie us up … The sail’s caught … Can we get a tow … “

Will somebody let go the bow line? 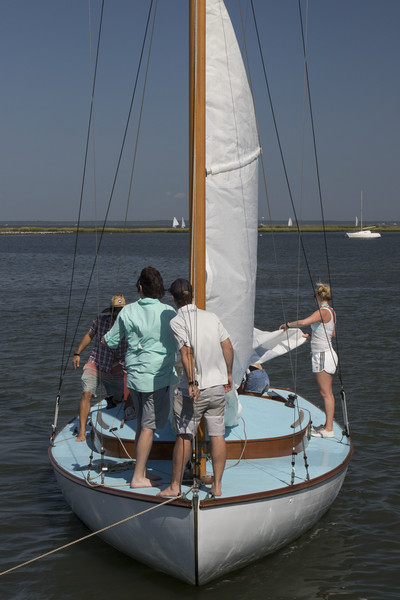 Third generation Little-Egger Sam Flagler was invited to skipper the A-Cat, Ghost. This boat was generously donated last year to the NJ Maritime Museum in Beach Haven.  (A splendid museum, WELL worth a visit.)  The boat is “mothered” by past yacht club commodore John Coyle, an inveterate supporter of lots of good things for Beach Haven and the island and the area (e.g. the Tuckerton Seaport Museum.)  Anyhow, Sam invited my granddaughter, Gretchen, to crew with him.  They’ve been sailing buddies since their learning days in the Junior Sailing program.  Here they are as young teenagers in the 2008 Quill-McCarty race around Mordecai Island.

And, eight years later, boarding Ghost for the races. 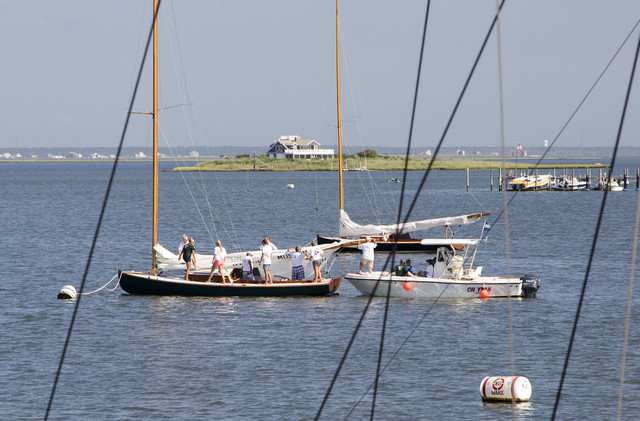 Finally, they begin their tow to the sailing grounds.

Torch decides to sail her way out, dragging her reflection behind her.

Finally, a Lensbaby view of the morning dock and preparation.

Sigh, it is.  I’ve said it before but endless summer isn’t.  I moved to the beach mid-June and had the whole summer ahead of me.  But that was then, and now it’s August.  Actually, things don’t change that much.  Gregg Whiteside on WRTI tells me every morning that the day’s going to be another two minutes less of sunshine.  Two minutes a day I can deal with, and I’ve still got two months before I have to return to the Old Folks Farm.

The beach and the bay still beckon, whether a perfect day or one with a stiff wind out of the west with whitecaps.  Here’s the view we’ve enjoyed looking west from Barb’s place in Holgate this summer. 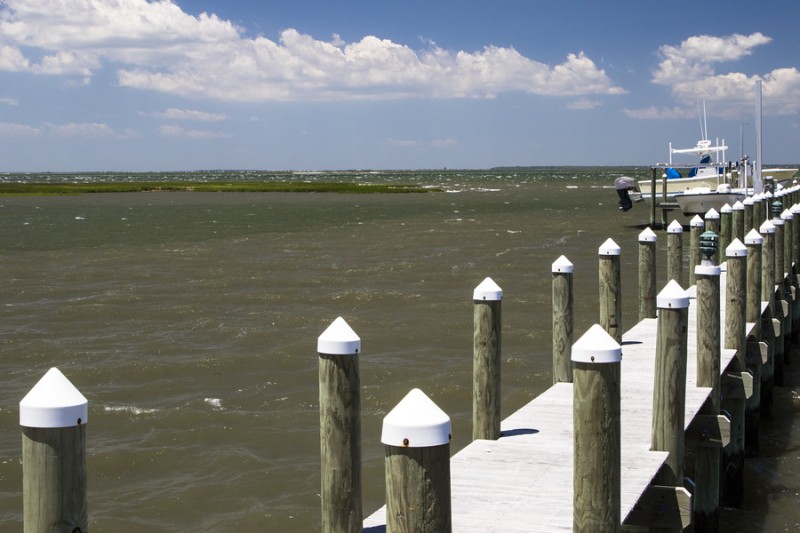 Sunrise at the “new” beach?  Priceless.  The reclamation project is pretty much done at the southern end of LBI, with some fine tuning such as gravel walkways over the new dunes.  The scene below is from the parking lot at the end of Holgate.  The beach chair occupant?  He’s the over-night guardian to protect us from the replenishment pipes and equipment on the other side of the dune.

By early July the project had extended this dune to cover the old wooden jetty that bordered the surfing beach at the beginning of the Forsythe Refuge.   The dredges at sea pumped tons of sand sludge onto the beach, and dozers such as this one moved it as the Corps of Engineers had decreed.  This took me back to my Sea Bee days.

Farewell to the jetty and also to the surfing beach because the jetty had created the surf.  Sic transit gloria.

Being a photographer at the beach summer after summer is challenging;  where’s the new scene or the new perspective?  Well, you have to keep your eyes and your head open and hope you’ll luck out once in a while.  Here’s one that surprised me.   Sitting on Barb’s deck at sunset I noticed the bay’s reflection in the windows of the house next door, and I loved it.  Even more when I developed it and discovered that the undulations in the window glass had created a rolling sea on the quiet bay surface. 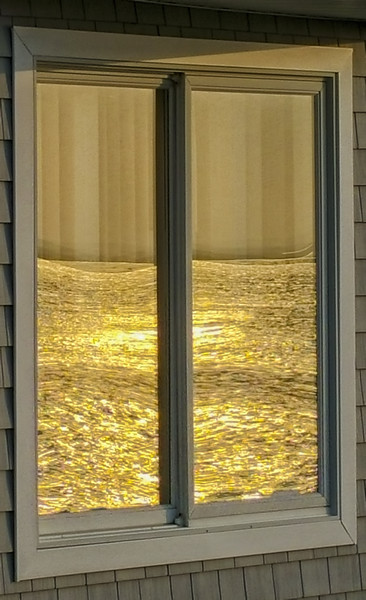 Another surprise grab shot was this scene.  I had gone to the beach to photograph a post-storm rainbow.  Beautiful? Yes.  Impressive? Sort of.  But, (yawn) another rainbow on the beach.  When I turned around and climbed the dune to return, however, here was a reminder of how narrow this sandbar is on which we live.  I’m on the beach dune and one can see the end of the street at the bay, only 1900′ away.  Composition Guideline:  always look behind you after you’ve taken your shot.

My favorite summer event is the Twilight Sail.  This year some heavy duty thunder storms were smashing the mainland so Barb and I demurred.  I felt it confirming when our Fleet Captain also declined.  Anyway, four vessels took off for the edge of the world, including our now Beach Haven resident A-cat, Ghost (the taller mast below).  They all returned safely.

I was impressed with the blue world into which they were sailing.  Made me think of a colleague’s photography business, Twilight Blue Photography.  (No charge, Pat.)

Well, so what if it’s August.  Summer’s still here and I’m stickin’ around, too.