CHRISTMAS: AN EARLY ARRIVAL OR JUST HANGIN’ AROUND?

This first snow storm of the winter put me in a Christmasy mood so I thought I’d get ready now for next December. Here’s the result. 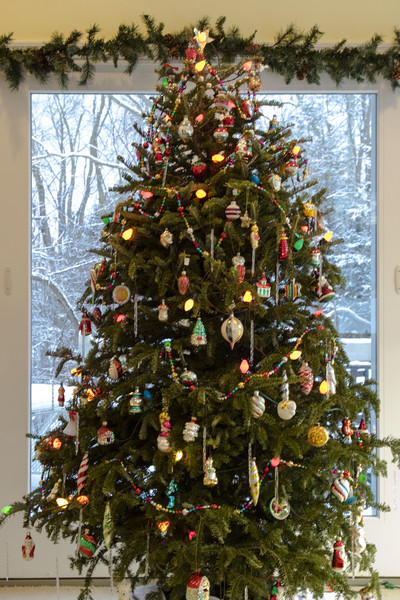 Yeah, yeah … it’s been up since mid-December.  But since it’s still up (and remaining for a while) I thought I’d have some fun with you all.

Here’s what the tree and the train village looked like “the night before Christmas.”

The tree ornaments include pieces from three generations.  A notable addition a few years ago was this heart.  It was painted for us by the late Jane Byerly, friend and artist whose Chinese watercolors grace my sun room walls.  The building represents the 1816 Barclay Farmhouse in Cherry Hill.  My late wife, Marty Lou, played a major role in its restoration during her twenty-five year involvement with it. 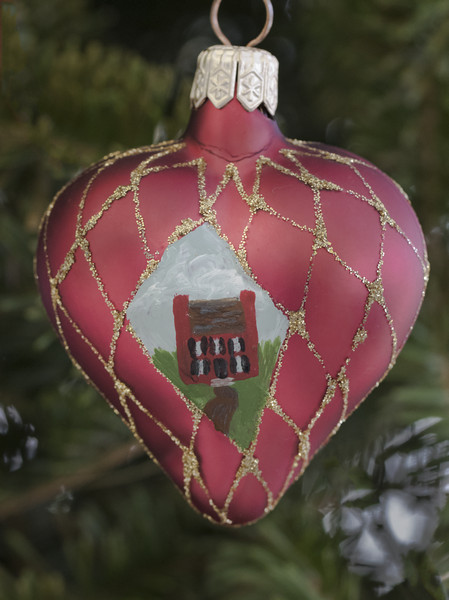 The train village is a collection of old-European architecture buildings which I built over the years from kits made by a German company named Faller.  The Swiss Railroad passenger cars are branded Roco which is an Austrian firm but they were made in Slovenia. The saddle-back engine was also made in Slovenia by Mehano.  Old cars and toys in the village are from family Christmases, some dating from the 1920’s.  One anomaly:  The engine is marked “Atlantic City Railroad.”  When friends ask about this I tell them that it was from the 1940 lend-lease program for England, and they left it in Europe after the war.  Who knows?  The skirt was stitched up for me by Barbara from a great pattern fabric we found at Jo-Ann’s.

The flamingo at the train station?  Three of them were left on my old basement train layout at Box Hill after an open house years ago.  The culprit?  Well, never convicted but suspected:  a family friend, Louise S.  The one shown is the only one to have survived the move out here to the Old Folks Farm. 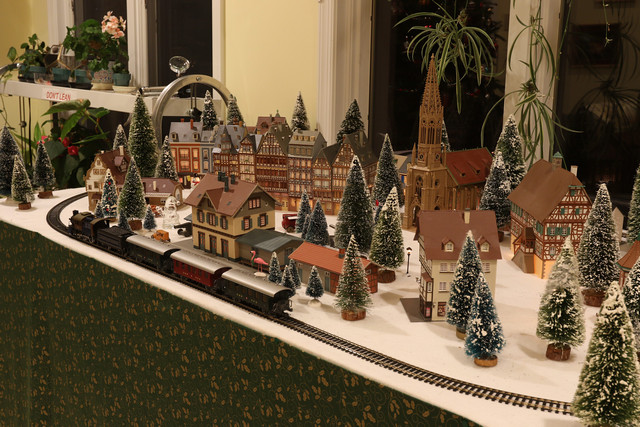 The Christmas tree will eventually join last year’s tree near my back yard feeders.  They provide a sanctuary from hawks and cats while planning a flight to and from a feeder.  This White-Throated Sparrow is one of many hanging out in today’s snow in the remnants of last year’s tree.

Here’s what actually triggered this post.  With morning coffee in the sun room my in-brain view finder noticed these sun catchers against the snow-filled world.  These are two more veterans of my stained glass period in the 70’s.  Both original designs, they get to appear during the season.  The sleigh is perfect for today, and the bells ring in the New Year. 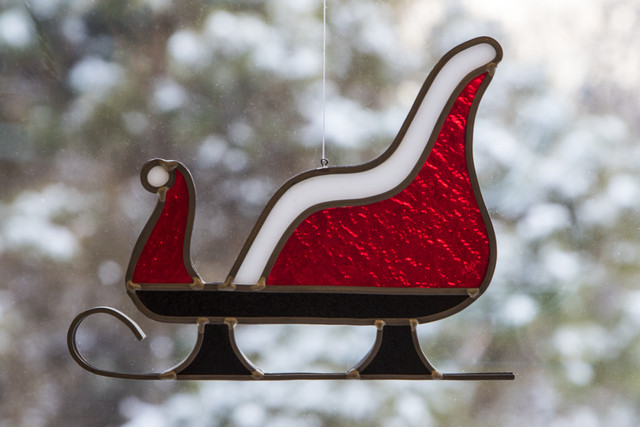 Finally, this guy, Rollo Reindeer, has made me chuckle for years.  His what-me-worry look coupled with the lights and bad hair antlers just do me in.  I bought him from a wood carver in Sandwich, MA whose work we had seen at Cape craft shows, and  it was a Christmas present for my late wife.  Not sure it was what she had in mind but ….

In any event,  I asked Rollo for a comment for this post, and he replied that before he gets sent back to the basement shelves he’d like to be the first to wish everyone a —

14 Responses to “CHRISTMAS: AN EARLY ARRIVAL OR JUST HANGIN’ AROUND?”

« MY BUDDY, GONE.
DECK THE HALLS ONE MORE TIME »