The past weekend featured the Winter Antique Show at Wheaton Village.  This has been an important destination of mine for years, offering among other things a chance to browse some high class Japanese Cloisonne from a favorite dealer, Arlene Rabin.  Well, she had some fine pieces but none came home with me.  We enjoyed the show, however, and also enjoyed browsing the nearby Gorham Paper Weight Shop which presents a broad array of glass art and not just paper weights.

The idea of driving an hour to Millville, however, prompted a thought: What else could we do having already driven that far?  The answer: Drive a little further and spend some time in Cape May.  In February, with temperatures in the 30’s?  Yes, and we had a great time.

First of all one thinks of Sunset Beach so after we checked in we had time to make sunset and we headed there.

My fingers ached, even with gloves, but we sacrifice for art. 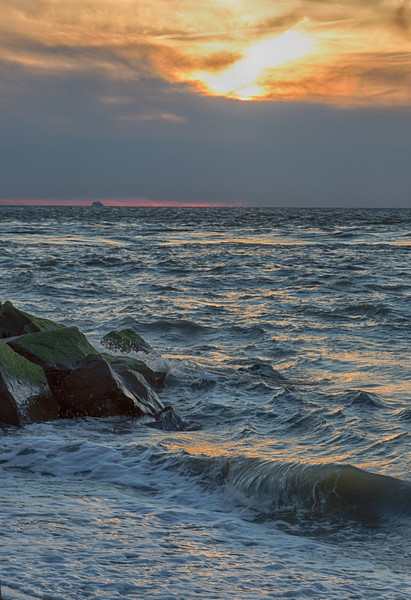 Yes, I’ve seen more thrilling sunsets but I like this one because of the chop and the sunset colors on the water.  For my camera colleagues, this was a tripod, live view setup.  I shot three images with different EV’s while focused on the rocks, and three more while focused on the middle ground waves.  I combined each set with Nik’s HDR and then blended the resulting two images in Photoshop.  (Interested in my photography?  See my eBook, “Shooting For Better Images” at http://www.BetterPix.net

tAnd all of this while trying to keep the brain and fingers working in the cold with Barbara keeping the car warm for recovery.  I also eagerly await having a print of this at a craft show and hearing someone say, “Oh, yeah, I’ve shot that scene a lot with my phone.”

We enjoyed the evening in the Blue Pig restaurant in the two hundred year old Congress Hall.  So did a lot of others whether staying at the hotel or nearby.  Their Victorian richly toned Brown Room (the bar) was SRO both before and after dinner.  We were nursing the last of our wine in a corner of the restaurant waiting area when our wait-person discovered us sitting there lonely and shivering and conducted us to seats by the (real wood)  fire in the lobby where dinner and drinks could mellow.  You won’t find this at a Holiday Inn Express.

I enjoyed reading up on the history of the Hall, particularly to find that the present Managing Partner apprenticed years ago as a bellman, desk clerk, and whatever, and is now the successor in ownership to his grandfather.  In another version of six degrees his grandfather had been advised on structural integrity issues by Wilbur Widell, an industrial contractor whom I had known years ago when he was a neighbor of our late friends, the Byerlys, in Haddonfield.

The hotel has been preserved (and re-preserved for mega-bucks) and maintains its traditional 55 white columns around the building.  Herewith some of the columns and their distinctive capitals.  The gaslights are a fine feature of downtown Cape May.

The next morning we opted to just drive lazily through Cape May.  The Victorian mansions along Beach Avenue are architecturally magnificent.  As a reflection of the times most are now bed and breakfasts.  Many along with most downtown motels and stores and eating places were closed for the season.  The scene befitting an overcast February day was a bit bleak.  Had we not enjoyed the previous evening’s crowd at the Hall I could have wondered about a Twilight Zone setting.  No beach badge checkers were on duty.

Before leaving the city we did a little shopping along Washington Mall where a few favorite stores were open.  I restocked my Fralinger’s taffy and Bayard’s chocolates from a store that used to be the very fine Barry’s Men’s Shop where I bought an occasional summer sport coat in the 70’s.  The Whale’s Tail is another favorite and I also did some damage at the eclectic Across the Way.  One of my must-visit favorites is Swede Things which carries mostly Scandinavian gift ware.  They were still heavily stocked with Christmas kinds of things, ornaments, Swedish tchotchkes, and all kinds of glass.  These caught my camera’s eye:

Congress Hall is owned by Cape Resorts and they have also developed other properties in Cape May.  We stopped in on the way home and found them to be on a par with the flair of the Hall.  One was the West End Auto Garage which has been converted to a multi-dealer craft and antiques shop, a fun stop.  The other is the 62 acre Beach Plum Farm which supplies produce and meats to Cape Resorts’ dining rooms downtown.  Breakfast and lunch are also served and there is a farm market store.

At the Swede Things shop mentioned above I was taken by some glass craft art.  I photographed a couple of pieces which you can see on my Facebook Page and the more I looked at them the closer one came to going home.  Here it is: 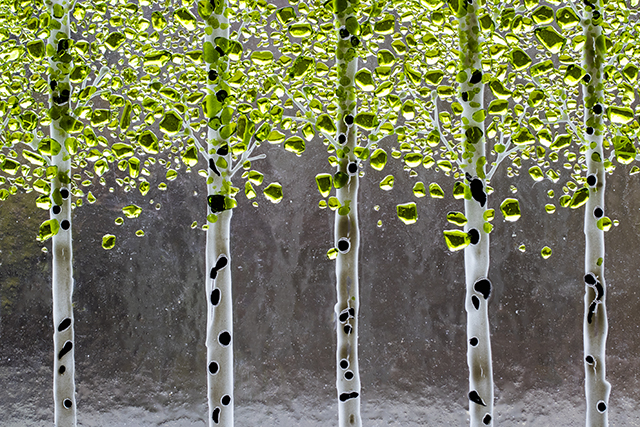 The artist, a west coaster named Zelda, paints the tree trunks on a pane of slightly hammered art glass.  Then she fuses the foliage pieces to the panel.  I’m sure this scene is a stand of birch on the edge of a Swedish forest, and I’m now enjoying it against a window in my garden room.

Did we have a great winter getaway weekend?  You bet!