As color and light fade in nature’s seasonal transition other sources come to the rescue.  Peddler’s Village at Lahaska, PA has done a great job at this.  I deliberately arrived late afternoon so I’d be there when the lights were turned on.  It was a pleasant afternoon with a crisp wind blowing, lots of holiday merchandise to see, and families enjoying the scene.  It was a festival for phone cameras but when some noticed my tripod and camera I was asked if I would take their family picture.  Of course. One young woman even asked if she could pay me to do it.  Wow, a new alternative to my paper route.  In between such excitements I captured some scenes.  Here’s one example: 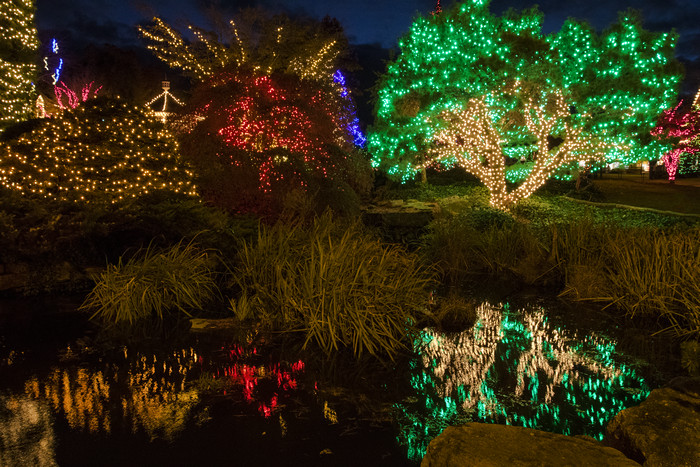 Another show for the season was the opening of the Electrical Spectacle show of lights in Philadelphia’s Franklin Square Park.  I have avoided their shows because the park is not convenient to mass transit.  This time, however, I forced myself:  the Patco High Speed line to 8th and Market and then only a ten minute walk to the park.  Here was my reward:

Continuing with holiday color, a couple of years ago I first noticed some glass boxes filled with LEDs.  I decided I could do that as well and so made three boxes for family and a friend  last Christmas which can be seen here.  I ran out of steam on the project so one didn’t get made for me.  This past fall at a craft show I saw some lanterns in which the clear glass sides had been replaced with colored glass and then the lantern had been filled with lights.  I had such a lantern and I had seen some striking glass on the Facebook page for Macie Art Glass and  managed to buy the last two pieces they had.  Here’s the result. 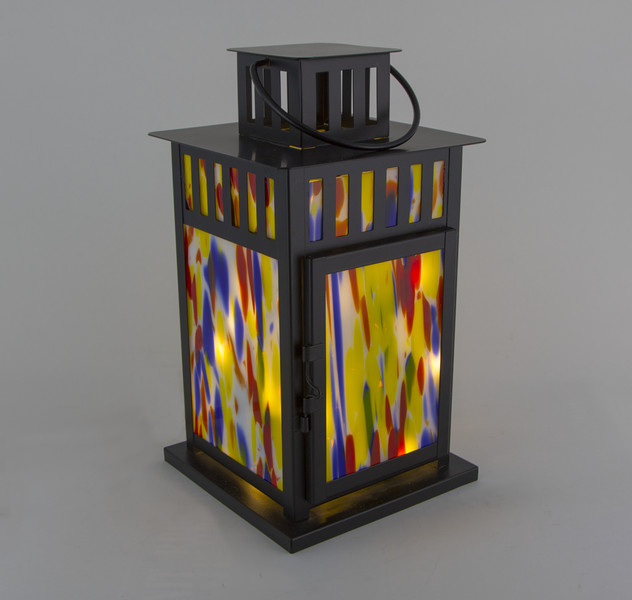 But nature’s work isn’t quite finished.  While having coffee in the sunroom one recent morning my eye was caught by sparkling in the nearby trees.  While I haven’t copied Morse code for years I made out that the signal was “Get your camera and get out here.”  The elves had hung diamonds in the trees.  Here’s one in which you can see the capture of the rising sun and the adjacent meadow and trees.  Thank you, nature.

And speaking of my sunroom I did some redecorating there this fall.  On a house tour last summer I was in the new home of an artist friend, Andrea P.  In her studio I saw a clever way to display smaller matted prints.  They were resting on narrow shelves which included a slot for the bottom edge of the mat, and a lip to further prevent slippage.  I learned that they had found them at Ikea, a perfect destination for this Swede so Barbara and I headed there and found them.  Typically for Ikea they have a weird name, Mosslanda, but they’re perfect for the job.  To top it off we brought home some Swedish meatballs with lingonberry preserves.

I planned out the wall and then Sigrid, my decorator among other things, amended my vision.  Then, as my back was feeling its age Sigrid did the heavy work to get the installation started and I finished the easy parts.  Add to that the upper wall of Beach Haven and Sanibel prints and I am content until spring. 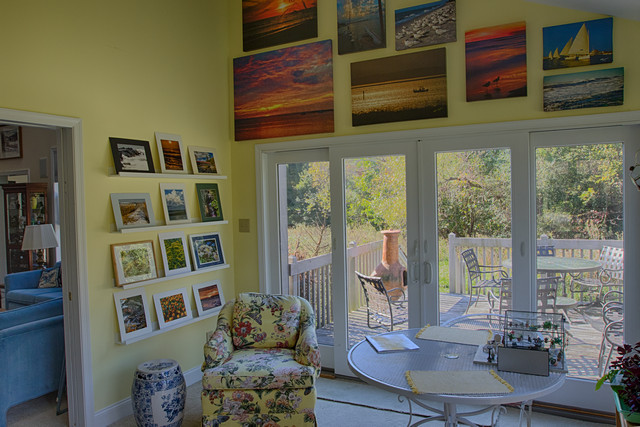 Returning to nature’s compositions I recently walked out the front door and found the walkway blocked by a massive spider web.  It was anchored between a bush on the left, and the roof of the  garage about nine feet away.  The early sun was playing with the web strands and the morning dew.  Behind it, the fading color of some fall hydrangeas.  My compliments to the spider.

For my closing color I chose this piece of blown and molded glass.  I photographed this at the October Festival of Fine Crafts at Wheaton Arts.  This is an annual “must-attend” show for me as it is consistently a show of up-scale, quality craft work.  I think it’s the best that I attend anymore.

I thought others might enjoy this piece, the kind of thing my late wife, Marty Lou, used to call “a pretty”.

14 Responses to “THE HOLIDAYS APPROACH”

« FALL FINALLY FOUND US
AROUND THE SUN AGAIN »