ANOTHER FLOWER SHOW MOVES ON

The Hort (The Pennsylvania Horticultural Society) has announced that over 250,000 people toured last week’s 2018 Flower Show.  Why did they all come on the same day I went?  Maybe it was payback for last year when I went on the snow day and counted only nine others in the entryway exhibit.  The annual Flower Show storm was scheduled for Wednesday so I and the other 249,999 people went on Tuesday.  Oh, well, it was worth it.  The entryway exhibit was eye-filling and breathtaking.

It was a huge structure around and over us, the upper part built of bamboo supported on steel pipes made to look like bamboo.  It took me back to our China trip many years ago in which we saw that all construction was created within a scaffolding of bamboo, even ten and twenty story buildings.  The structure was laden with plant material, most in sphagnum moss containers but with isolated specimens in water-filled glass tubes.  The color and texture were magnificent but….but….it was the sound of the tropical rain forest birds and other creatures that brought it home, almost to the extent of my thinking maybe I should keep my cap on.

The imagination in the design of the entryway exhibit continued on into the show.  I thought that the other exhibits were well designed and well executed.  There were even — hold it — a lot of flowers on display.  (I’ve knocked it in the past for paucity of blooms).  The tulips were there from Holland, always a pleasure. 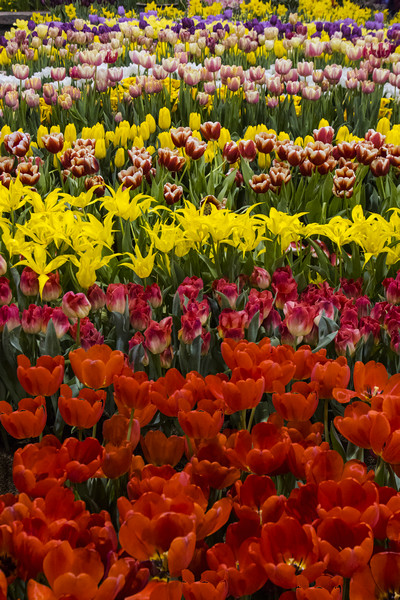 And orchids galore; they were all through the rain garden exhibit as well as here and there in individual exhibits.

But, the art in the exhibits……

This was an arrangement of hanging glass globes with orchids inside of them.

There must have been a sale on the glass globes.  Here was a cascading arrangement that made me think of Bridalveil Fall in Yosemite Park. 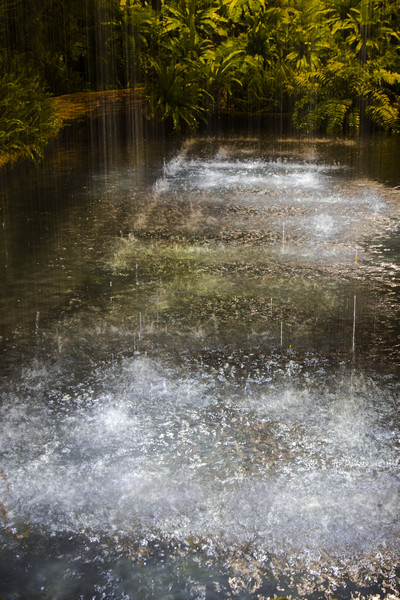 The show’s theme this year was “Wonders of Water.”  Here was a fine example: a backyard lighted pool enjoying a gentle rainfall. 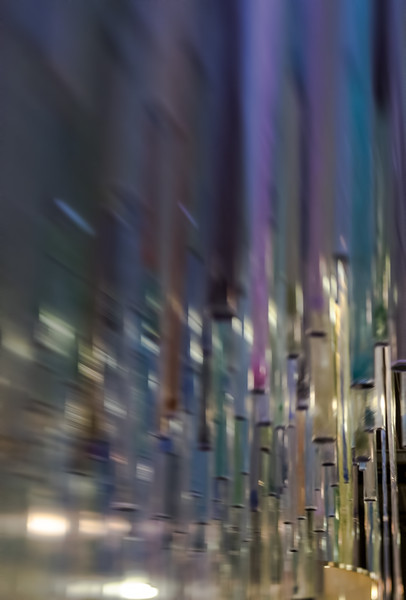 Another suggestion of water: a series of multicolored pipes hanging from the ceiling suggesting a rain shower. 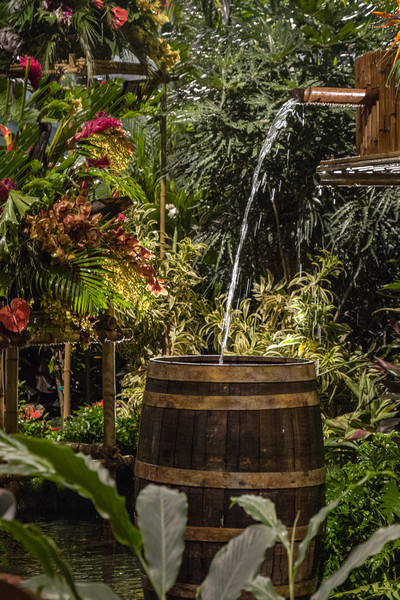 Finally, a perfect suggestion of water: a rain barrel, catching the runoff from the rain forest.

I loved the show.  I also enjoyed the Hamilton Horticourt which features members’ specimens in competition.  I thought that the lighting was the best I can remember and that the arrangement of categories was pleasant. A knock, as I’ve mentioned before, the Hort has taken over (my guess) about a fourth of the display area to flog their own wares… plants, gardening and show-related items.  It’s nice stuff but I can’t help but think about the ticket price paid, in part, to walk through their store.  That space has, in the past, been useful for garden clubs and landscapers to exhibit their capabilities.

A friend recently noted my absence from this blog; my last post was January 9th.  Well, life gets hectic; acute bronchitis comes along; a recuperation on Sanibel becomes necessary (I know, tough).  My old PC monitor died and a wrestling match ensued with a new 4K resolution monitor; it turns out that legacy apps may not have kept up with the technology and so their menus are tiny on screen.  The only one I’ve found that I coudn’t fix is my last version of Photoshop, CS6, so it’s live with the fine print or surrender to CC, Photoshop in the cloud.

Other obligations become backed up.  Only today did the Christmas train platform come down.

And there’s also always an issue about coming up with new material but I think I’ve got a backlog now.

10 Responses to “ANOTHER FLOWER SHOW MOVES ON”

« ICE IN THE PINES
A WHITE SPRING »