Snow in March shouldn’t be a surprise although it’s more typically in the first half.  Witness the almost annual Flower Show storms.  But a biggy coming the day after spring officially begins is pushing things.  So…live with it and enjoy whatever part of it you can.  I did.

It had been hard at it all day, now rain, now sleet but finally, stormy snow.  At 11:00 at night it was still at it.  It demanded my camera’s attention which, unfortunately, meant I had to go out there as well.  A lot of my shots didn’t measure up to what my eye saw but this one certainly made a statement. 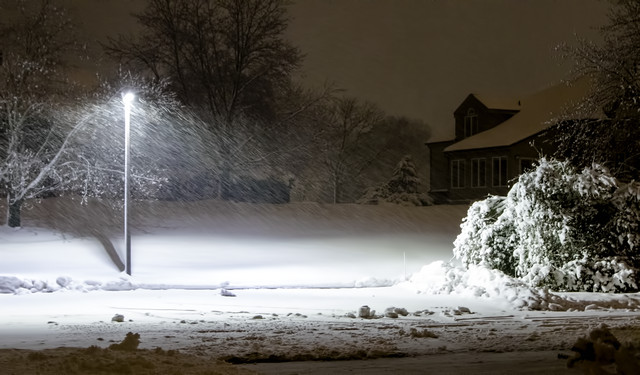 Stupid old man; out here in just a sweater.  Nog! Genug! Basta! Ya está bien!  Ca suffit.  And that was it for the experiments.

But the next morning?  Ahhh, a different story.  I have quoted the distinguished Bob Krist before in this blog, “If you want to take more interesting pictures go to more interesting places.”  (He does, for e.g. National Geographic Traveler.)  Well, it occurred to me that your own world is a greatly different place after a snow storm so get out and shoot.

I looked out at it and knew I should be out there but the drifts looked a little intimidating.  What the hell, my “Help, I’m in a snowdrift.” button works all over the campus so, boots on, out I went.

The first steps were easy before I headed for the woods.  It was a good thing that Sigrid had put up my spring wreath.  Otherwise, the snow might have come right inside.

But, into the woods!  I had wondered how it would be on the Red Trail under a bower of snow-laden branches.  It was mesmerizing, and there was a light at the end of the tunnel.

Other things seen along the trail.

More Ice in the Pines.

Looks as though the sun will break through.

Wait.  It seems as though the trail is leading back home.  And to breakfast. 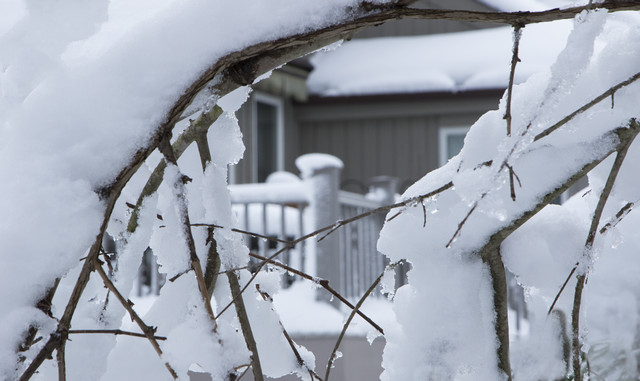 Thus endeth the snow walk.  Back home again and with a golden hint of spring insisting on moving in.  Hurry! 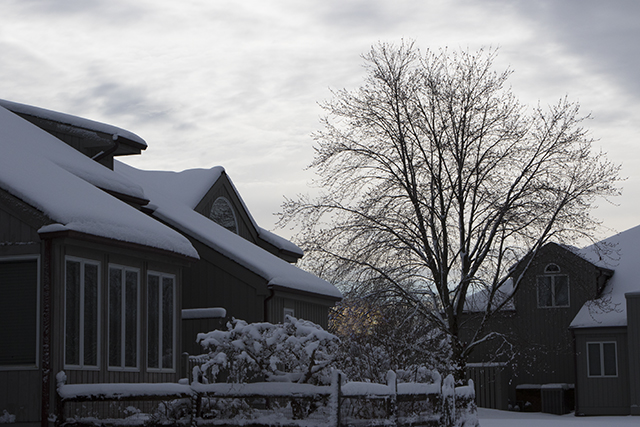